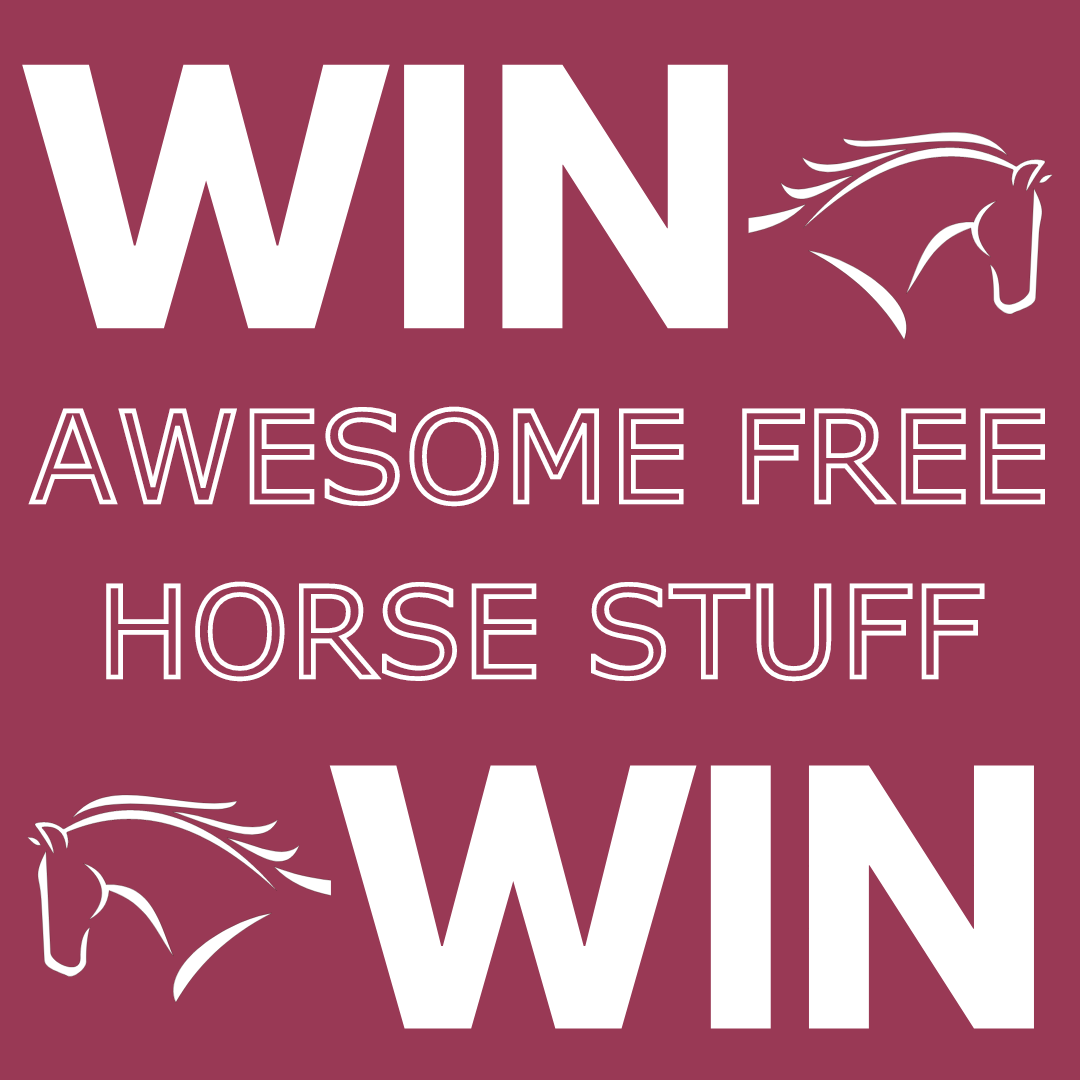 Contests and giveaways are great especially when you win free horse stuff!

Check out some of the great horse giveaways and contests out there.

We are in no way affiliated with Instagram or Facebook or any of the contests we are sharing. Make sure you read the rules/terms and conditions of each contest before entering. You are responsible for making sure these contests/giveaways are legitimate.

*Remember to not giveaway your personal information*

Some of these contests can also, or only, be done on Facebook. We try to pull a wide range of equestrian giveaways which means they are not all US contests, so be sure to see what country you need to be a resident of to enter.

While we love holding our own contests and hope you enter our contests, we unfortunately can't hold contests everyday. 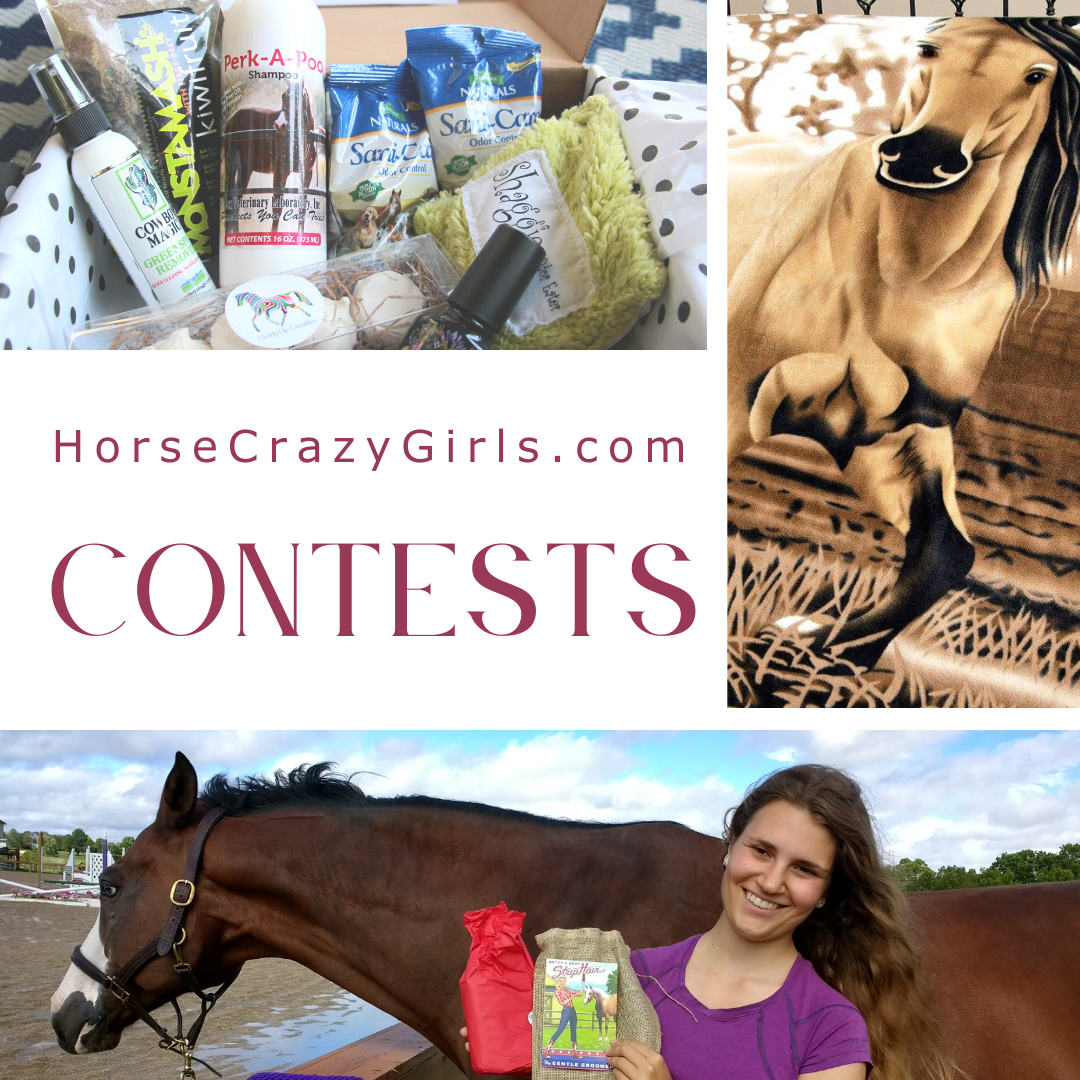 So here are some other horse contests where you can enter to win free horse stuff.

But be sure to check your email to find out when we are hosting another contest.

If you win something through another contest that you found on this list tag us in your social media post, we would love to celebrate your win with you! 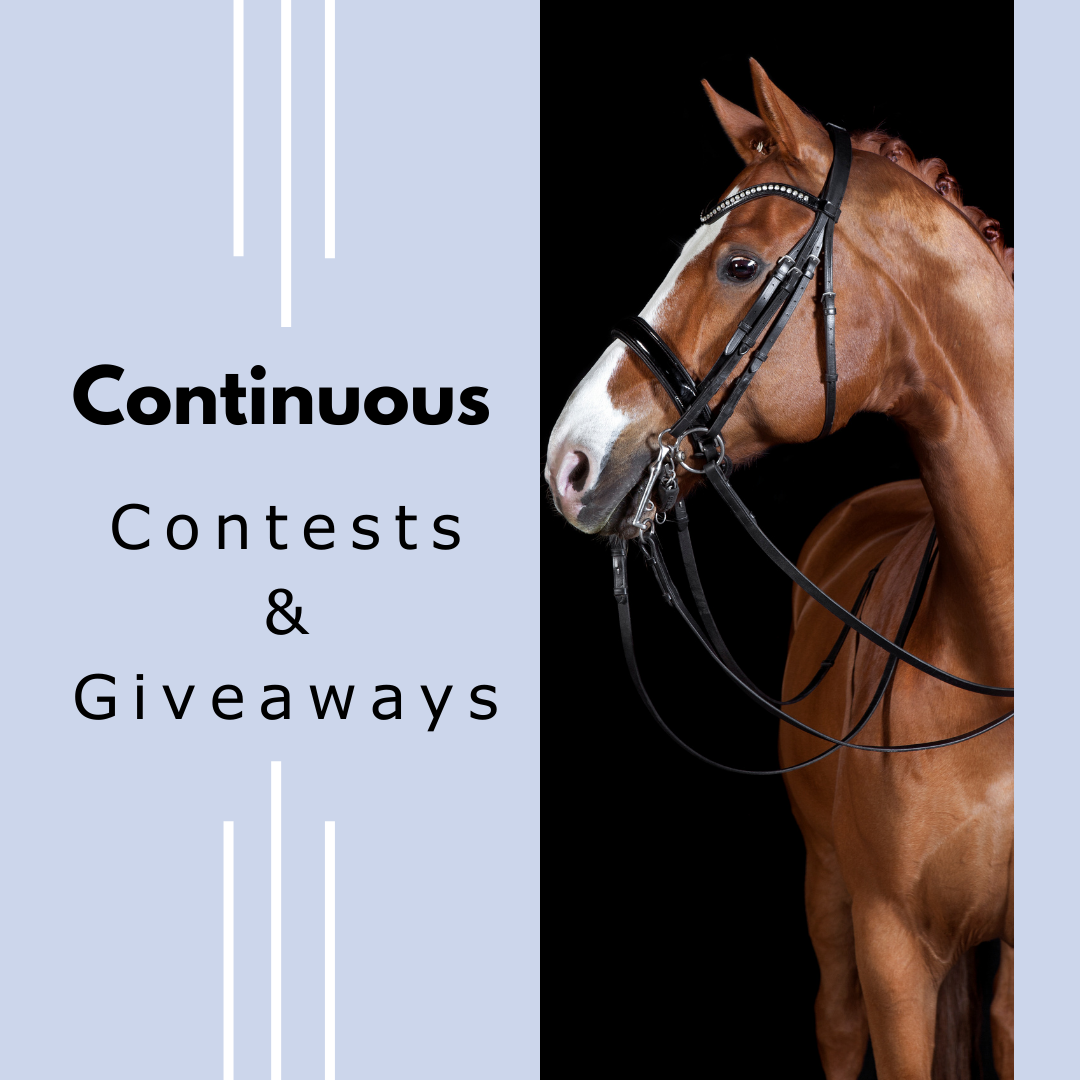 Also if you know of another horse contest that you want to share tag us or send us an email and we can possibly post it here.

Equestrian Giveaways: For horsecrazygirls in the UK

Schneider's Weekly Giveaway: For horsecrazygirls in the U.S.

@healthyhaircareeq This company seems to run pretty regular equine giveaways on their Facebook and Instagram accounts so stay tuned.

@ridingwarehouse Does lots of horse giveaways throughout the year.

@horsehotspots Is another account that does several equine giveaways throughout the year.

@doversaddlerydallas Does trivia and you can win fun prizes.

@kimphillipsequine Is hosting a giveaway enter by September 30th.

@rideisha Talk about a cool prize, enter by September 30th.

@artemia_flambeau Is hosting a giveaway no date is posted.

@premierequineengland An Arion riding jacket is the prize for this contest. Enter by September 30th.

@paardenpicture Enter by September 30th for a chance at this great prize.

@olivia_tullock Talk about some cool prizes enter by October 20th.

@kat_downer Some great prizes up for grabs enter by September 27th.

@equinexceed Is hosting a giveaway enter by October 5th.

@epuk_southwest Has a giveaway going on until October 12th.

@handmedown_eq For those 18+ this giveaway is going on until September 30th.

Check out our Previous Competition Winners

Check out our previous contest winners! 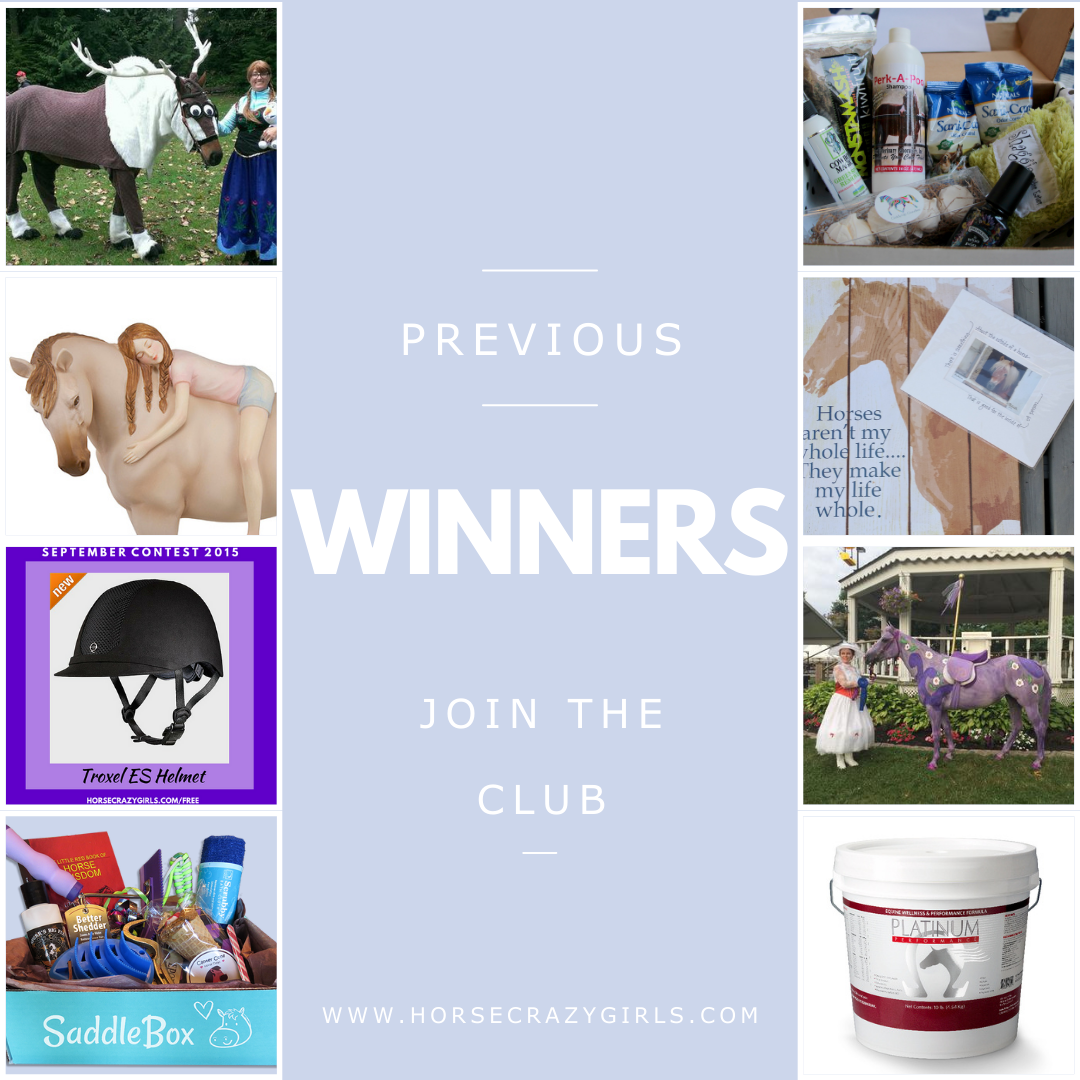 Join the horse club for tons of great stuff including notifications when we launch our next contest! 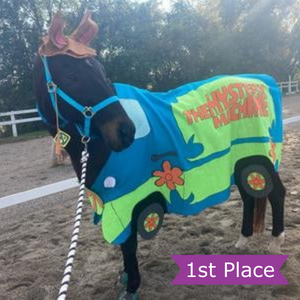 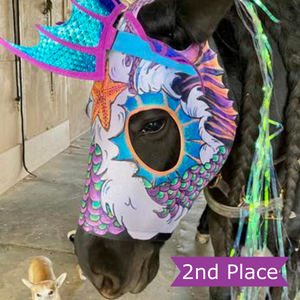 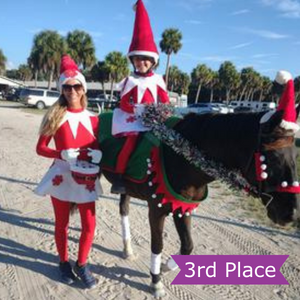 Congratulations to our winners! 1st place went to Mystery Inc, 2nd place to Sea(horse) Creature, and 3rd place to Elf on the Shelf & Elf Pet. Thank you to everyone who participated in the contest and took the time to vote. 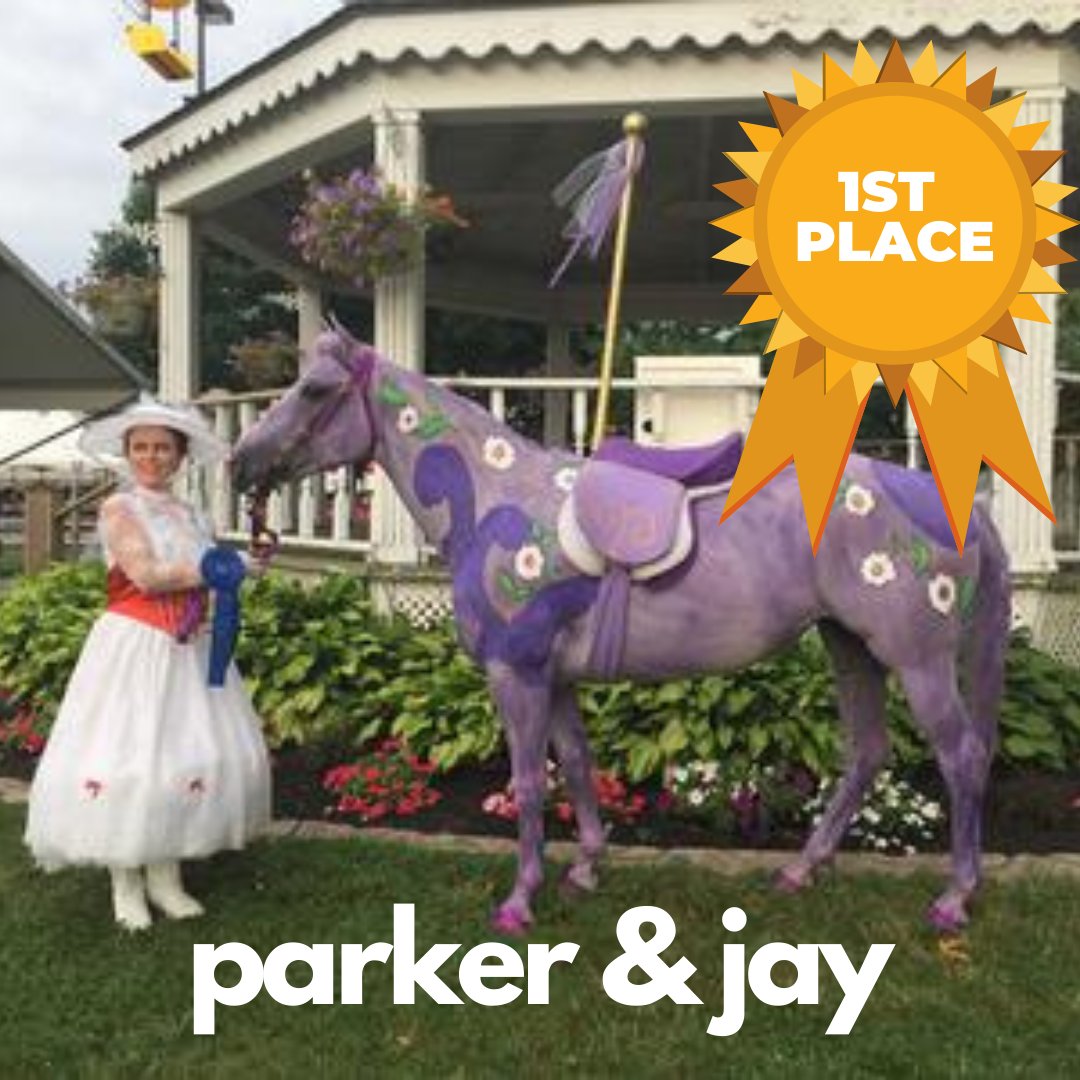 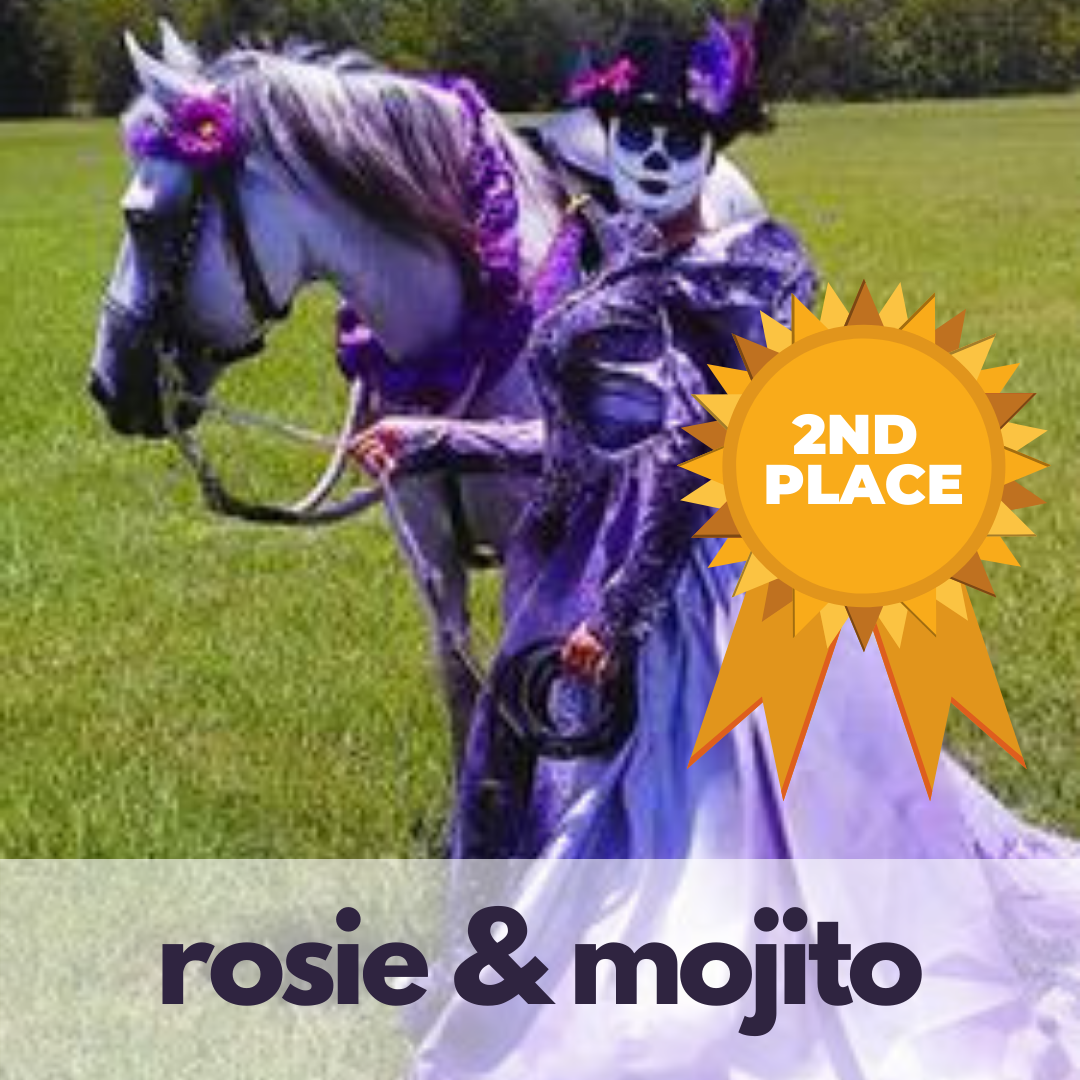 Congratulations to our winners: 1st place - Parker & Jay and 2nd place - Rosie & Mojito! Thank you to everyone who submitted their horse Halloween costume and those who took the time to vote.

We had many lucky winners for a starter pack from Horse Paradise ... an awesome new horse game! Winners will be notified through the game. Thank you to everyone who participated in the game and to the creators of the game that donated this great prize.

Congratulations to Linn on winning this Saddle Box subscription box! Thank you to Saddle Box for donating this awesome prize and to all those that participated in the contest.

Drea won these stunning riding breeches for her entry - Zombie Super Heroes Gone Bad - in our 2017 Horse Halloween Costume contest. Thank you to everyone who submitted their horse Halloween costume and those who took the time to vote. A big thank you to Shockemoehle for donating this great prize.

The winners of our Rows of Throws contest are Shelly from Texas and Jesse from Indiana! Congrats! Thank you to Rows of Throws for donating this amazing horse prize and to everyone who entered this horse competition.

Winners of our Halloween Horse Costume Contest 2016 are: Lynn/Wizard of Oz (first place), Courtney/5 Seconds of Summer's Cal-Pal and Mike-ro-wave (second place), and Katherine/Alien Attack on An Astronaut (3rd place)! Congratulations! Thank you to everyone who submitted their horse Halloween costume and those who took the time to vote.

Congrats to Justin, Skylar and one other winner who wants to remain anonymous. I hope you enjoy reading Ariel as much as I did! Thank you to the author of this great horse book for donating this great prize and to everyone who entered this great horse contest.

Winners of our Horse Quest Online contest are: Sydney (IL), Aylon (TX), Ilona (Poland), Nicole (UK), Isadora (Brazil), Crystal (Portugal), Dakota (MS), Hayli (CT), Hailey (TX) and Tina (TX)! Many thanks to Dineth and Maya at Horse Quest Online and congratulations riders! Thank you to everyone who entered this awesome horse contest and the creators of this fun horse game for donating these great prizes.

Winner of Troxel Helmets Rebel helmet giveaway is... Heather from New York. Congrats Heather & many, many thanks to Troxel! A big thank you to everyone who entered this awesome contest and to Troxel for donating this great prize! 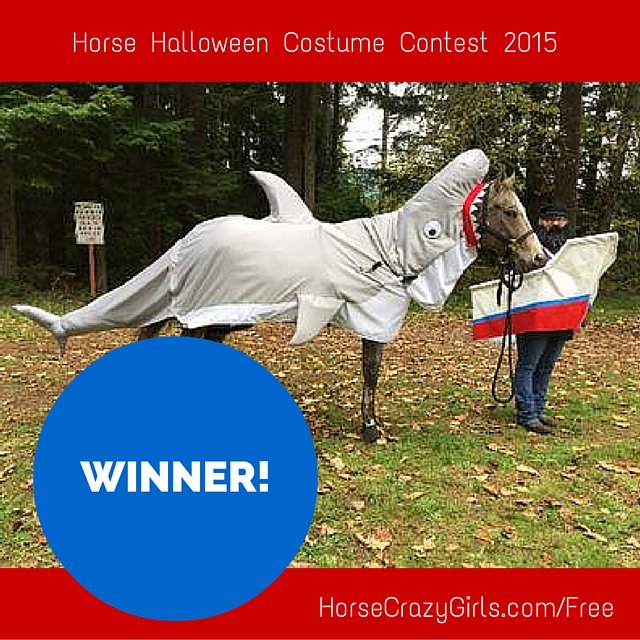 The winner of our Horse Halloween Costume Contest 2015 is "Catch of the Day!" A big thank you to everyone who entered the contest and to Troxel for donating the Troxel all-purpose Liberty helmet!

The winner of the Troxel ES helmet is Lindsay from Florida. Congratulations! A big thank you to everyone who entered this awesome contest and to Troxel for donating this great prize!

Congratulations to Elyssa from California for winning a copy of the awesome Fantasy Stables horse game! Thank you to everyone that participated in this great competition.

Morgan S from Wisconsin USA is the winner of the Heartland book series.

Megan from Arizona is the winner of the book Chase by Sydney Scrogham.

Congratulations to Chloe in Oklahoma for winning an autographed copy of Lucy’s Chance, the first book in the Red Rock Ranch series by Brittney Joy.

Congratulations readers on winning these awesome prizes! A big thank you to all those that donated books and to those that participated in this fun horse contest. 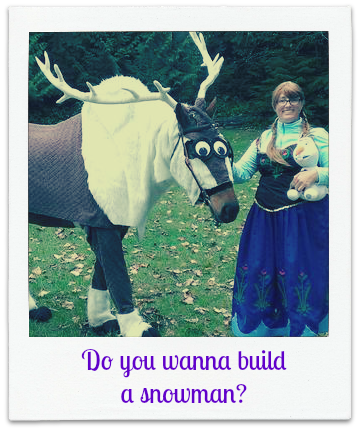 Sadly her horse passed away several days after the competition but we are so happy he went out in style - and as a winner! He'll always be on our hall of fame. A big thank you to everyone who submitted a horse Halloween costume and to those who voted. We hope everyone loves the prizes they won.

The social media competition is over and we are notifying the winners by email: Jesse W., Natalie D., Ashley B. and Anna M. Thank you to everyone who participated in this horse contest. Congratulations and thank you to all of you who participated! We hope you all love the prizes you won.

Congratulations to Grace from California for winning awesome horse treats and a horse game! A big thank you to everyone who participated in this horse contest. We hope you love your awesome prizes.

Our first place winner in the 2013 Halloween Horse Costume Contest was: Bella & Khate! A big thank you to everyone who submitted a horse Halloween costume and those that took the time to vote. We hope everyone loved the prize they won. 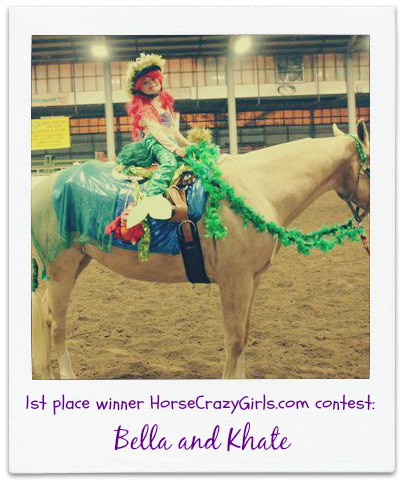 The first place winner in our Halloween Horse Costume Competition 2012 was Jessi and Dexter! A big thank you to everyone who submitted a horse Halloween costume and to those who voted. We hope everyone loves the prizes they won. 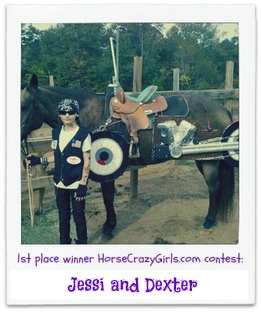 Erin from Missouri, USA, won a copy of the horse book The Girl Who Remembered Horses.

The horse book The Perfect Distance went to Stefanie from Blair Nebraska USA, Monique from Tallangatta, Victoria, Australia; Celine from Canada and PaintedGoatLady.

Rachel won a copy of the horse book Wild Girl.

Congratulations to all the winners of these wonderful horse books! Thank you to everyone who participated in these contests. We hope everyone loves the prize they won.

The winners of this horse Halloween costume competition were:

Leke's friends laughed at her but we think they were wrong. What do you think? Batman halloween costume

Second Place: Dressing Up as a Horse

Mackenzi's grandma made this costume so she can dress up as a horse. Isn't is adorable? My horse costume

Third Place: Time for Some Fun With Disney

This costume is super cute and love the fact that she used her riding helmet as part of the costume! (Always be safe.) Disney horse costume

Even though this horse Halloween costume contest is over, you are still welcome to share your Halloween horse costume ideas and photos for fun! We hope everyone loves the prizes they won.

The first place winner of this best horse themed party competition was Madison:

Hold Your Horses You're Invited!

Third place in the best horse themed party ideas contest is a tie between Anna from England and Carrigan (from Canada):

Horsey Birthday Party on a Budget

We hope everyone loves the prize they won.

Our winners for this horse game contest: Morgan B., Mandy P., Kelsie S., and Savannah N. We have notified them by email. Thank you to everyone for playing! We hope everyone loves the prize they won.