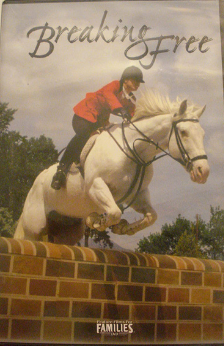 Breaking Free was one of my favorite horse movies for a long time. I loved the idea of having a special bond with a horse that allowed you to overcome any obstacles life threw at you. While I now know life is a bit more complicated than that I still think it is a great and inspiration horse movie. Plus the scenery in the movie is really pretty since it is set at a mobility training camp by the water. The movie is also under the title A Leap of Faith for some reason, which is important to know if you look this movie up online. I would also like to say that while this movie technically has a PG rating I think it is more of a PG-13 type of movie. 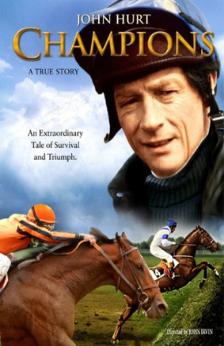 I love horse movies based on true stories, especially comeback stories which Champions a no-brainer. Based on a true story this film tells the story of British jockey Bob Champion. Bob Champion is not only one of the top jockeys of all time, but he also has a remarkable life story. I don't want to spoil the movie for you, but in the movie Bob is a great horse jockey who finds out he has cancer, which forces him to step away from racing as he gets treatment. Luckily, he is able to beat the cancer and return to racing where he gets to ride a special racehorse named Aldaniti in the Grand National Steeplechase. I won't say anymore, but you will definitely want to have some tissues handy as you watch this incredible horse movie. 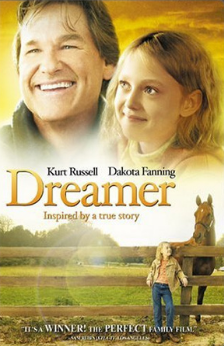 To this day I still remember seeing Dreamer in the movie theater and just being in love with the film, partly because I wanted to rescue a horse and win a big show together. Getting back to the movie, this horse movie which is inspired by a true story and has cast members such as Dakota Fanning, Kurt Russell, and Kris Kristofferson is must see. In the movie Cale and her father buy a injured racehorse mare named Sonador. The thoroughbred mare is not expected to recover, let alone return to racing. But thanks to the dedication of her new family the mare does just that. This is defiantly a heartwarming and inspirational movie that is great fun for the whole family.

King of the wind. 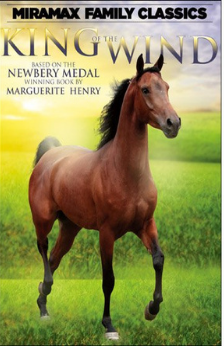 Based on the Newbery Medal-winning novel by Marguerite Henry, King of the Wind follows the incredible story of the Godolphin Arabian. From the birth of this incredible foal, to being gifted to the King of France, to becoming one of the most important foundation sires for the Thoroughbred this movie takes you through the defining moments of this horse's life. There are tons of insightful and interesting moments in this film featuring the stable hand Agba and the Godolphin Arabian. This really is a wonderful story of the bond we have with horses while also educating people about horses and lineage. The cast of this movie includes actors and actresses Richard Harris, Glenda Jackson, Jenny Agutter, and Nigel Hawthorne.

miracle of the white stallions 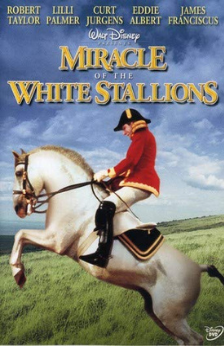 Another great film is Miracle of the White Stallions. The movie takes you through the incredible rescue story of the amazing Lipizzaner horses during World War II. If you aren't familiar with the events during WWII, what happened was that Col. Alois Podhajsky who was the head of the Vienna Riding School was worried that when the Soviet army got to the riding school's beautiful white Lipizzaner horses they would destroy them. In order to try to protect the horses the Colonel reached out to General George S. Patton of the U.S. army. When you watch this horse movie you may not even believe that it is based on a true story, but I assure it is. 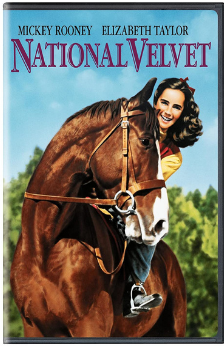 If you ask someone to name a horse movie they will probably either name Black Beauty or National Velvet. This horse film is one of those movies that both horse lovers and non-horse people enjoy. The story is centered around a horse crazy girl named Velvet Brown who is played by Elizabeth Taylor. In the movie Velvet wins a horse named Pie through a lottery system her local town has. Velvet has always wanted a horse and is excited about winning Pie even though everyone claims he is 'unbreakable'. Thankfully Mi Taylor, a jockey, is in town and willing to help the pair. Mi, played by Mickey Rooney, helps Velvet and her horse and even gets them ready for the Grand National. 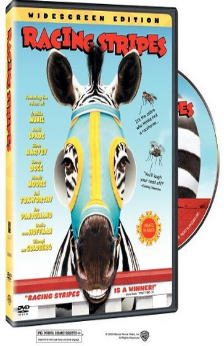 This may not be the most popular horse movie out there and it definitely isn't realistic but I love how fun an quirky it is. Racing Stripes is a cute movie that follows a rescued zebra through his unlikely journey to become a racehorse and compete at the Kentucky Derby. While not everyone believes in him, he thankfully has a champion in his owner who sees that Stripes is special. The movie is made that much cuter by the fact that Stripes, which is the zebra's name, is able to talk to his other animal friends. If you love and underdog story filled with laughs this movie may just be the right one for you. 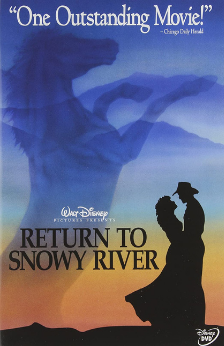 Chances are you know about the The Man From Snowy River movie, but did you know it has a sequel? I am always worried when a movie sequel comes out because I have very firm views on what a sequel is for. I always feel like a sequel should wrap up any questions you had after the first movie and give you a view of what the characters have done in their time and what they will do after the movie ends. Thankfully, this sequel does most of that. The sequel explores Jim Craig's return to the Australian high country where farmers are being driven out by wealthy ranchers and his girlfriend is being pursued by a wealthy rancher. So, what exactly happens with Jim's return? Watch Return to Snowy River to find out.

Spirit: Stallion Of the cimarron 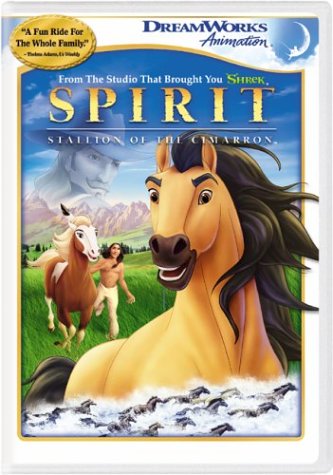 Spirit: Stallion of the Cimarron is on my top 10 list of my favorite animated movies of all time (and I am a big animated movie fan). This horse movie is amazing I really can't say enough good things about it. From the story to the animation and including the music everything is excellent. If by some chance you haven't seen it you definitely need to. The movie is from the perspective of a wild mustang named Spirit who is born in the Old West which is starting to be settled. Obviously this movement of people from east to west brings change and challenges to Spirit's life, which you will get to experience as you go along with Spirit in this animated movie. 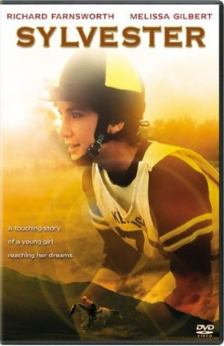 If you want a sweet horse movie filled with just the right amount of excitement then Sylvester is a great option. The movie is centered around an orphan girl who is trying to make a living training horses so that she can take care of her younger brothers. Unfortunately she loses her job, which forces her to sell her horse Sylvester. In order to try and get as much money as possible from the sale of her horse she decides to try and train the horse for eventing so that they can compete at the National Equestrian Trials. So what happens to this family and Sylvester? You will have to watch the movie to find out. 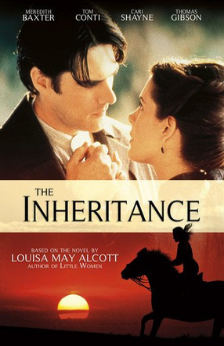 Us horse girls know we can be incredible horseback riders and luckily, for us we have chances to prove our riding in the horse world. But back in the 19th century this wasn't the case for many woman in certain horse sports as you will see in The Inheritance, which is based on a manuscript by Louisa May Alcott. In the film a young woman named Edith who is an accomplished rider, plans to be the first female jockey in an upcoming horse race. Of course many people around her don't like the idea of a female jockey. The situation is made more and more difficult by the people around Edith, from her friend Amy to her cousin and even her admirer. 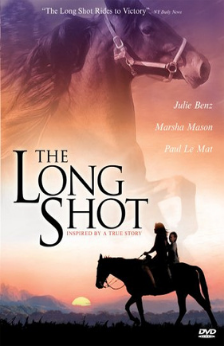 The Long Shot is another one of those amazing horse movies I still remember to this day. As horse people we understand the deep connection we have to these animals, how they help us through tough times, listen to all our troubles, and so much more. What I think makes this horse movie so special is that it really captures what horses mean to us and the connection we have with them. The plot of the movie itself is centered around a family that moves to California where trouble strikes. Annie thankfully gets the chance to work at an incredible dressage barn where she is able to ride a special horse. Unfortunately, things once again take a turn for the worst and Annie must turn to her beloved horse to help her overcome these hardships. 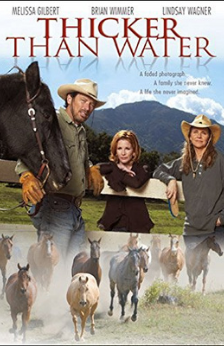 Thicker Than Water is a heartwarming story about family, forgiveness, and self discovery. In the film Natalie loses her father and when she is going through his belongings she finds out that her father had a life she never knew about so she decides to find out more about her father's life before her. Throughout her research she finds a half sister who seems to be her opposite. But they may have more in common than they think if they can both look beyond the surface of one another and together they may find out that blood is indeed thicker than water. 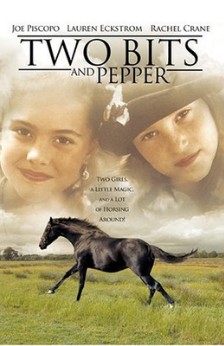 Two Bits and Pepper is a fun, adventure packed horse movie. In the film criminals kidnap two girls and intend to ransom them. However, the criminals plan isn't exactly working and it is made all the more difficult by the girls equine friends who are trying to rescue the girls. As the horse and miniature pony (yes this is one of the few horse movies with a miniature pony) come up with more and more ideas and the criminals get more desperate the more laughs there are. I honestly wasn't expecting a lot from this movie, but it turned out to be a great one which earned it a spot on this list. If you give this horse movie a chance you may just fall in love with it too. 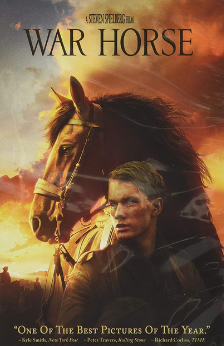 Get your tissues ready for this horse movie because it will definitely tug at your heartstrings. Directed by the famous Steven Spielberg the movie War Horse takes you on an incredible journey. It all starts when a young man named Albert finds out his beloved horse has been sold to the Calvary by his father during the first World War. With no way to find his horse Albert decides to join the British Army in the hopes that this will lead him to his best friend. As both horse and man face the realities of war in different capacities neither forgets the other. Whether you are or aren't a horse lover you won't want to miss this incredible movie.

Love what you are seeing make sure you join the horsecrazy girls club and then check out all the other awesome games, books, and horse filled activities and content on horsecrazygirls!